Several months ago, we practiced the Reversible Chevron stitch, and in this tutorial, I’m sharing three new things:

On one hand, you’ll learn how to knit the Ribbed Chevron stitch, ideal for scarves, blankets, and rectangular shawls or wraps (both sides look almost identical, and it stays flat! Yay!).

On the other hand, you’ll see what to do to make both extremes of the garment look the same when knitting a stitch that creates picks (or a pointy edge). In other words, how to get symmetry in your Chevron stitches… yeap, it’s possible!

Last, but not least, you’ll learn how to bind off and seam two knitted pieces at the same time, without seaming. This technique is called “3 needles bind off”.

Before we start I’d like you to know that the Ribbed Chevron stitch forms an embossed arrow pattern, practically identical on both sides.

You’ll be delighted to hear that due to the frequent combination of knits and purls, the fabric stays flat… I know, I know, form an orderly queue please 😉

However, please note that when you start knitting this stitch, you’ll see sharp picks at the bottom edge (which is totally normal due to the double central decrease).

Interestingly enough, when we finish and bind off, the other extreme (the upper edge) stays completely straight. There will be no picks. We’ll end up with two different edges.

So, what to do to make both extremes of the scarf/blanket look exactly the same?

No, we do not reach for the scissors!

If you want that both edges show the picks, then knit two separate pieces, and join them together later on.

For example: When knitting a scarf, split the length in two, and knit two pieces that have the same measurement (let’s say 31 in / 80 cm each). And don’t bind off; leave the stitches “live” in each part.

To join them, try the Grafting technique that we’ve done for the Spiral Hat (sewing up both sides using a tapestry or darning needle).

However, you can also use another technique (I explain it in the video tutorial), which consists of using a third needle of the same size, to connect them knitting, not sewing.

This way both extremes of the piece will look identical, and there will be a slight division in the middle.

RS: Right side of the work

m1R: “Make one right” or Right-leaning increase (take the bar between two stitches with the right-hand needle. Place it onto the left-hand needle from front to back, and knit that stitch through the back loop). We have created one new stitch.

cd: central decrease (slip 2 stitches knitwise at once, knit the next, and pass the slipped stitches over the last one).

This swatch was made of 100% cotton yarn (one of my favorite brands, because of the quality and the extensive color palette) #ad

And I used one of my favorite carbonized bamboo needles (this set is just marvelous: It not only comes with the most used sizes but also it includes pretty useful knitting tools) #ad

How to knit the Ribbed Chevron stitch

2º and every even row: Work each st as it presents (knit the knits; purl the purls).

These 8 rows create the pattern. Repeat them until the desired length is reached. When finished, BO working each stitch as it presents, after a row 7 (this way the upper extreme will show straight).

On the contrary, if you want to get symmetry, do not bind off, and knit a second piece of the same length. To join them, please watch the video tutorial 😉

This is the wrong side of the work:

A big hug and happy knitting!

PS: If you like the way the fabric ends in point please have a look at the links below for another adorable lace pattern with interesting edges:

“As an Amazon Associate I earn from qualifying purchases.” 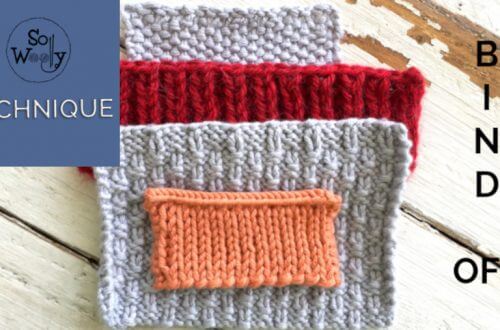 4 knitting techniques and tips to bind off different stitches: Fisherman’s Rib, No curl Stockinette, among others

XWe use cookies on our website to give you the most relevant experience by remembering your preferences and repeat visits. By clicking “Accept”, you consent to the use of ALL the cookies. In case of sale of your personal information, you may opt out by using the link Do not sell my personal information. Read MoreCookie settingsREJECTACCEPT
Manage consent

This website uses cookies to improve your experience while you navigate through the website. Out of these cookies, the cookies that are categorized as necessary are stored on your browser as they are essential for the working of basic functionalities of the website. We also use third-party cookies that help us analyze and understand how you use this website. These cookies will be stored in your browser only with your consent. You also have the option to opt-out of these cookies. But opting out of some of these cookies may have an effect on your browsing experience.
Necessary Always Enabled
Necessary cookies are absolutely essential for the website to function properly. These cookies ensure basic functionalities and security features of the website, anonymously.
Functional
Functional cookies help to perform certain functionalities like sharing the content of the website on social media platforms, collect feedbacks, and other third-party features.
Performance
Performance cookies are used to understand and analyze the key performance indexes of the website which helps in delivering a better user experience for the visitors.
Analytics
Analytical cookies are used to understand how visitors interact with the website. These cookies help provide information on metrics the number of visitors, bounce rate, traffic source, etc.
Advertisement
Advertisement cookies are used to provide visitors with relevant ads and marketing campaigns. These cookies track visitors across websites and collect information to provide customized ads.
Others
Other uncategorized cookies are those that are being analyzed and have not been classified into a category as yet.
Save & Accept
Share via
Facebook
Twitter
LinkedIn
Mix
Email
Print
Copy Link
Powered by Social Snap
Copy link
CopyCopied
Powered by Social Snap