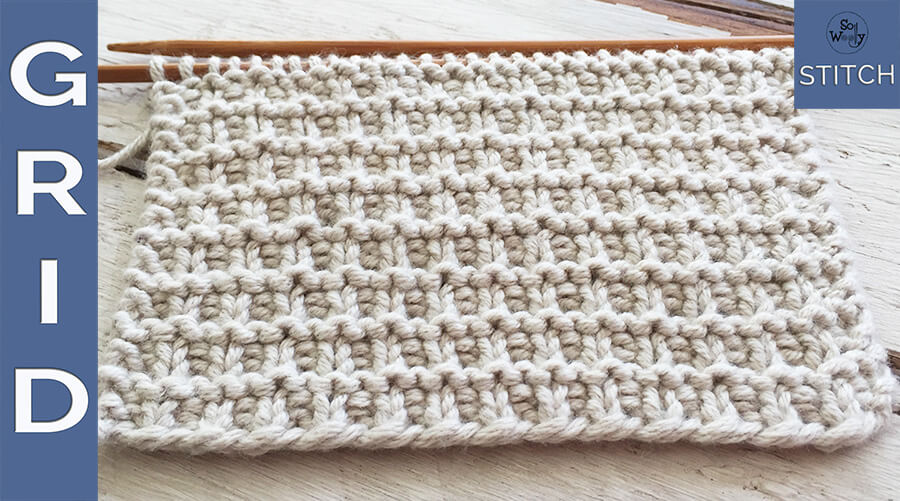 In today’s tutorial, we’ll learn how to knit the Grid stitch. This is the first time we’re going to knit a dense, thick, grid stitch (so far, all the patterns we’ve learned are lace grid stitches).

I love the Grid stitch because it features a lot of advantages: It’s super easy to knit, it doesn’t curl, it’s reversible (almost identical on both sides), and it’s also unisex (it works for children’s, women’s and men’s garments).

This is a four-row repeat pattern, two of which are plain knit rows. The other two require only knitting and purling, so, if you are just starting to knit, this pattern will suit you!

Due to its characteristics, the Grid stitch is a fantastic option for knitting hats, scarves, infinite cowls, bags, sweaters/cardigans, even placemats or table runners.

Grab your needles, and let’s knit together!

RS: Right side of the work

The even rows form the right side of the work.

The first and the last stitch are selvedge stitches, and they will be knitted on each row.

How to knit the Grid stitch

CO an odd number of stitches (this number will include two selvedge stitches).

These four rows create the pattern. Repeat them until the desired length is reached. When finished, BO knitwise after a row 3.

This is the other side of the work:

PS: Searching for more reversible knitting patterns? Take a look at this list! 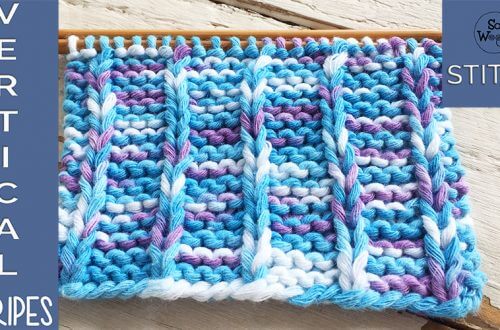 How to knit Vertical Stripes: A two-row repeat pattern that doesn’t curl 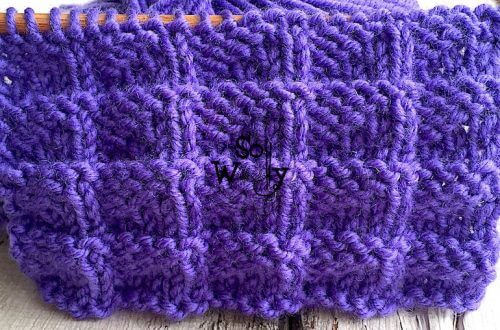 How to knit the cute Pennant stitch – it lays flat, no matter what! 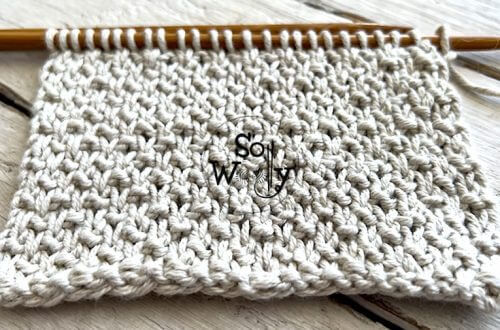 How to knit the Drizzle stitch pattern (English & Continental style)

XWe use cookies on our website to give you the most relevant experience by remembering your preferences and repeat visits. By clicking “Accept”, you consent to the use of ALL the cookies. In case of sale of your personal information, you may opt out by using the link Do not sell my personal information. Read MoreCookie settingsREJECTACCEPT
Manage consent

This website uses cookies to improve your experience while you navigate through the website. Out of these cookies, the cookies that are categorized as necessary are stored on your browser as they are essential for the working of basic functionalities of the website. We also use third-party cookies that help us analyze and understand how you use this website. These cookies will be stored in your browser only with your consent. You also have the option to opt-out of these cookies. But opting out of some of these cookies may have an effect on your browsing experience.
Necessary Always Enabled
Necessary cookies are absolutely essential for the website to function properly. These cookies ensure basic functionalities and security features of the website, anonymously.
Functional
Functional cookies help to perform certain functionalities like sharing the content of the website on social media platforms, collect feedbacks, and other third-party features.
Performance
Performance cookies are used to understand and analyze the key performance indexes of the website which helps in delivering a better user experience for the visitors.
Analytics
Analytical cookies are used to understand how visitors interact with the website. These cookies help provide information on metrics the number of visitors, bounce rate, traffic source, etc.
Advertisement
Advertisement cookies are used to provide visitors with relevant ads and marketing campaigns. These cookies track visitors across websites and collect information to provide customized ads.
Others
Other uncategorized cookies are those that are being analyzed and have not been classified into a category as yet.
Save & Accept
Share via
Facebook
Twitter
LinkedIn
Mix
Email
Print
Copy Link
Powered by Social Snap
Copy link
CopyCopied
Powered by Social Snap